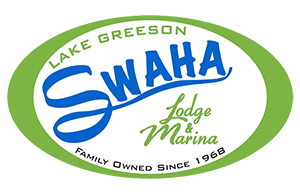 Welcome to SWAHA Lodge, located in the foothills of the Ouachita Mountains on beautiful Lake Greeson. We are located just 6 miles north of Murfreesboro on highway 19, and only 8 miles from the Crater of Diamonds State Park that is the home of North America’s only diamond mine.

SWAHA is family owned and operated by Janelle Fant and her son and daughter-inlaw, Kevin and Janet Fant. Their grown children, Hunter and Aspen (manager) also take pride in helping with the business and they both are raising their families just as they were raised…on the water! We are now starting the fourth generation, with Aiden, Easton, and Everleigh, to carry on the family tradition.

Hershell and Janelle bought the business in 1968 after the first massive flood that descended over the Narrow’s Dam. Water has descended twice since then, in 2009 and again in 2018. At the time the Fants bought the business there were only 2 wooden docks that housed a total of approximately 25 stalls that floated on 55 gallon drums, a restaurant (currently the Swaha House), only 4 rustic cabins, and a tiny store.

In 1982, Hershell suffered a massive heart attack and died unexpectedly during Kevin’s senior year of high school. Kevin immediately began helping Janelle take over the operations with a long-time friend, Willie Williams, who lived on the premises and had previously, helped Hershell as a part-time employee. During the 80’s, Janelle, Kevin, and Willie ran the business but later Willie retired and moved into Murfreesboro; Kevin continued to learn from experience. Willie died in the fall of 2012.

In 1988, they built a modern store to replace the old one and every year there were expansion projects. In previous years, SWAHA was a seasonal business that extended from Memorial Day through Labor Day each year but as business expanded and more modern lodging facilities were built, they began catering to trout fishing and diamond “diggers” during the off-season. This grew into a year-round business. Now, SWAHA is open 365 days per year.

In 2004, a floating store was built and additional stalls were added as a courtesy dock. Also, the Dam Grill and its open-air dining facility were added as a concession for SWAHA’s guests in 2009. The grill serves a variety of breakfast, lunch, and dinner menu items and is open seasonally. Chicken Quesadillas and homemade burgers seem to be the favorites, as well as the fried green beans. The new kitchen construction and Friday Night Catfish was added in 2015 and really boosted business. Kevin and Janet hand-cut every piece of farmraised catfish to ensure quality fillets; homemade slaw and pepper pups, pinto beans, French fries, and trimmings complete the delicious special.

SWAHA is proud of the fact they have grown to employ 3 full-time, and approximately 18-25 part-time, as well as the Fants and their families. SWAHA is also proud to boast about their floating store, the Dam Grill, 2 rustic cabins, 2 private cabins, 8 condo units, 5 modern cottages, the Captain’s Quarters and the SWAHA House. In addition, 2 new tree house units and a new one-bedroom unit was completed in 2016.

In the spring of 2017, the Clumsy Owl site was purchased with 2 one-bedroom private cabins nestled on the 17+ acre property but there are plans to add more cabins and keep it secluded with natural surroundings and habitat. In late 2019, The Frozen Flamingo Shaved Ice stand was built on a floating dock that is attached to the marina store. It has become a very popular hangout for all ages as many love to sit on the dock while enjoying a refreshing shaved ice. There are a variety of flavors and they will custom make your favorite. The Trout House that sits on the bank of the Little Missouri River was added to the rental units. A new linen and maintenance building was constructed to provide more space for linens and lodging supplies. Also, in late 2019, a new 10 slip covered houseboat dock was built to replace an existing wooden dock. It is located near the back of the bay area. The original 25 slips have increased to 231, and they house a variety of boats that range from 18′ fishing boats to 95′ houseboats. That’s not all; they hope to continue expanding to accommodate the needs of their guests. They hope to help build and maintain a new ATV/Nature trail around the lake and continue with more lodging and possibly an event venue in the future.

2020 was just a survival year due to COVID and 2021 wasn’t much better. However, both were record breaking years. In 2021, new signs were erected and wi-fi service finally made its way to the area and was installed in all lodging facilities! New outdoor seating and fire pits were added to several units in hopes that guests would share quality time telling tales while listening to the fire crackle and roasting hot dogs and marshmallows. We pray 2022 brings good health and normalcy to everyone so they can continue to get outdoors and explore to make lasting memories.

SWAHA would like to thank all their loyal customers who have helped them grow into such a successful business over the past 50+ years. Hard work and dedication have been a big factor but the Fants agree their guests make it worthwhile. They have numerous repeat customers and they have noted several families on the second, third, fourth, and now fifth generations returning for family vacations. Many of the families have made SWAHA an annual trip for generations and that is what we, here at SWAHA, love to see. Please let us extend our greatest appreciation to you as a valued customer and let us include you in our family. We hope you make this your home away from home and make lots of lasting memories here at SWAHA Lodge. Please enjoy your stay and be safe on your journey home. 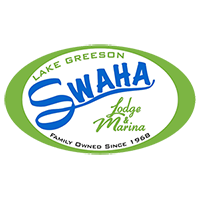